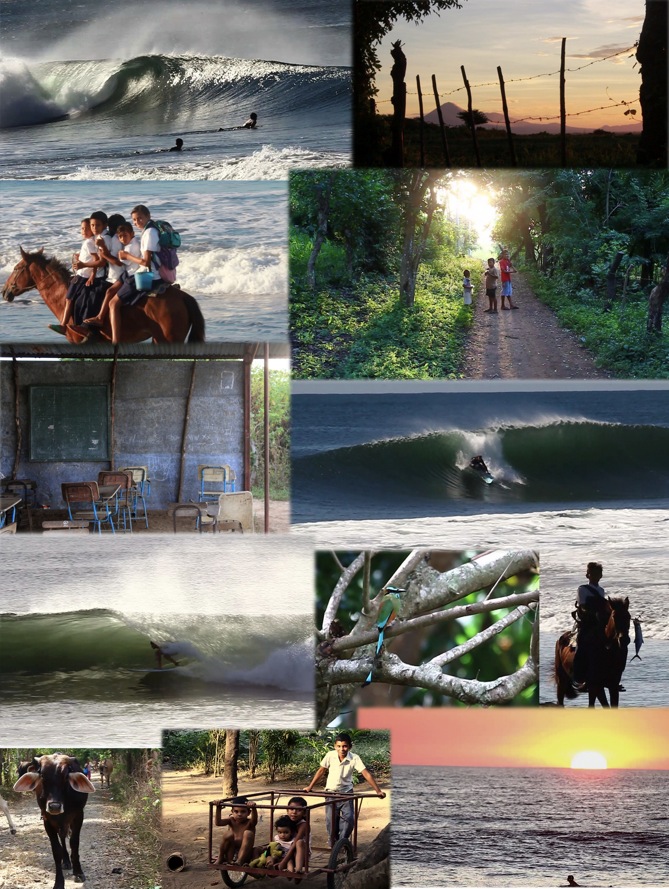 Every morning Donald graciously wakes me up with a long deep moooo.  If your thinking "what happened to gary?"  fear not, donald is the name of our new neighbor.  He weighs close to 700lbs and is actually a she.  In fact, there are about 30 donalds living a stones throw from our bed  and every day an hour before dawn they let loose long low Mooos  while the local farmers milk them by hand.   Guess the local rooster is out of a job huh? Not to worry, he gets the midday shift to announce lunch,  the sunset shift to call in all work hands for dinner, and for some awful reason he lights up again at 2 in the morning - maybe last call at the local bar?
Anyhow, after being awoken at 4am, we boil a bit of water and suck down a few cups of coffee, force feed ourselves a bowl of  goopy oats, and pack up for a day at the beach.   By the time we leave, the farmers have 3 huge buckets full of milk and with a grin of success they tip their hats to us as we pass by.
It has been a harsh transition since our arrival a few days ago.  After luxurious visits with our families in the states,  our senses were weakened and unable to cope with a lower quality of life.   By lower quality I mean simpler, I just haven't come to terms with that yet.

Upon arrival at the airport,  we loaded our massive cargo - board bag, two duffel's, and two heavy backpacks-  into an economy size taxi.  The beach we were heading to would have required 3 different buses and since it was already 2 pm, it would've ended up a two day trek.  The taxi, while more expensive, would allow us to sail through the hectic city of Managua and  make it to the rural beach community before dark.     The price difference would mean eating only rice and beans for a while yet to come.
As we waded through the bustling city life I remembered all of the nuances that make Central America so special.  Vendors holding up buckets of iced sodas and bags of sliced mango walk the between the traffic lanes as cars, trucks, and horse drawn carts buzz (or clop) by- only stopping when the rusted swaying stoplights gleam red.
At one intersection, a ragged and dirty mother  hoisted her equally ragged and dirty four year old son to her shoulders, where he stood proudly juggling three balls for all four lanes of vehicles  to see.  When she set him down he skipped from car to car sheepishly looking around.  I held some local money, cordobas, out the window which he took  gently,  grinning ear to ear with a sincerity that made my stomach drop.
As we careened onward I noticed an enormous amount of graffiti  decorating the long high cement walls -  but instead of the scrawled ugly sort it was artfully done with brilliant colors and bubbly design.  After having passed a series of dilapidated houses, all crushed together in communities that rival a house of cards in structural soundness, the graffiti truly helped lift your spirits.  Then as if emerging from the underworld, the entire scenery changed drastically- the tipping tin shacks replaced by elegantly enormous shopping centers as nice as any you'd see in upscale areas in the states. I half wondered if I'd slipped into a daydream, the contrast was so profound.
It wasn't long before the city released us into the rolling farmlands that dominate Nicaraguan landscape.  I suppose the taxi driver couldn't have predicted getting stuck behind five different herds of cows being driven home by young farm boys, lengthening a two hour trip from the airport to nearly three and a half.   Apparently dusk is a busy time of day, all the livestock have to be brought in from pasture.   We bumbled along behind and amidst these great smelly creatures for quite a while- leaving us dusty, stinky, and slightly nauseated by the time  we trundled up the driveway to the cabin we'd rented for the next few weeks.
Soon after unloading we discovered that the outside view of this cabin was its best feature and the rest of the details a little less endearing.  Just thinking about it makes me want to dump a bucket of hand sanitizer over my head.  It did have a couple of small fans and a light, so at least there was that.  But the single beds were so tiny that  Gary's feet hung off the edge even when he laid diagonally and the 'mattresses' were basically just rumpled up clothes covered by a sheet;  so lumpy it would have been more comfortable to sleep on the floor- but for the red scorpion and starfish-sized spiders lurking about.  Then there was the lack of running water - only a barrel outside to splash over yourself.   The bathroom was a longdrop a hundred yards away from the house, constructed of sticks and black plastic.  It  had no door and the 'toilet' was made of a rough cement that hurt to sit on. The longdrop also had a resident bat that would dive bomb you if you tried to enter during the dark hours.   Trillions of bugs had already infested the premises of the cabin thanks to the light, so with one hand at the ready to swat and splat, we begun unpacking.
The worst part was discovering how far from the waves we were.  We'd been led to believe it was close to twenty minute stroll, which is no big deal.  But it turned out to be a forty minute hike up and down rocky hilly terrain, many parts of which riddled with cow poo mines.  This may sound easy until you consider the average temperature is between 90 and 95, with a humidity factor pushing it closer to 105. And we are each wearing a fifteen to twenty pound pack - filled with filming gear and water.   It was a hot, sticky, smelly, and heavy trek.
That is how we came to appreciate Donald.  Although irritating to be woken pre-dawn everyday, it made one-way of the roundtrip beach mission bearable due to lower temperatures.  After we passed the milkmen and their proud smiles, a cool brisk breeze swirls around and is so refreshing we can almost ignore the slightly sour smell of thirty cows being milked as we head to the beach.

The key to happiness is awareness.
You don't need to abolish desire and live like a monk on a mountain.  But being aware of  your desires and appreciating the ability to work hard or manifest them into being will bring you great joy.
What happens is that most of us get our wishes and desires fulfilled everyday - little and big ones- but we focus so intently on the wishes not yet come true instead of seeing the blessings already surrounding us.      When you arrive at your destination without an accident-  be grateful.  When you eat your lunch - be grateful.  When you complete a task - be grateful for the mental and physical health to do so.  Be grateful for your job, your food, your family your friends and all the things in your life.  If you are not standing naked in the middle of a barren desert - you have something to be grateful for.  (even then, you could be grateful that you are alive)

We are so consumed by desires and the feeling of have-not,  we need to shift to embrace both desire and gratitude simultaneously.  I think this would cure much of our worlds insanity....

Moving on -
We took a brief trip away from whooville to the wonderful land of right pointbreaks, El Salvador.  For a week we enjoyed an open faced mush burger wave with the crowd of latin american pro surfers all in town for the ALAS Latin pro event.   After weeks at a freight train beachie, it was nice to have a minute to do a turn.   It was fun to see old friends again, and  while getting to the semi -final was nice for me,  it was even nicer to surf a point wave with only 2 others out for those 20 minute heats.

We headed back to Nicaragua straight away because the next  surf contest was heading there and arrived to find a delectable swell with better sandbars.   Filming the freesurfs was a nightmare, all the pro kids just getting sick ones left, right and center - and us trying to capture everything that was going down with only one camera.  For the contest,   I made it through a couple of the hardest heats- against the best girls on the Latin pro tour -and won 3rd in the final.  While we were sad to watch our friends pack up and leave the following day, it was nice to actually be able to catch some waves without the contest chaos.
Now we're returning to the routine life here.  We upgraded our living situation - moving out of the bat cave and into a beautiful clean spacious place with a kitchen, fridge, toilet, shower and running water. It is only a 20 minute stroll to the beach now, passing through a local community of tipping shacks, a bit of open field, a small papaya farm, and a dash of old world forest with huge gnarled mangrove trees and quite sizable land crabs.
Waves have started to degrade again so we are spending more time working on other projects for the time being.  Hopefully the forecasted holiday swell brings something lovely..... happy hollowdays as our good friend suggested....
until next time..