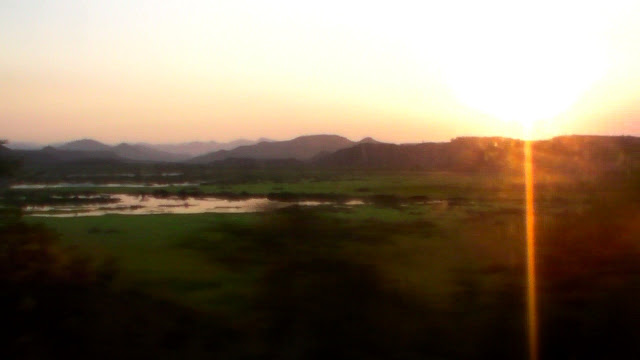 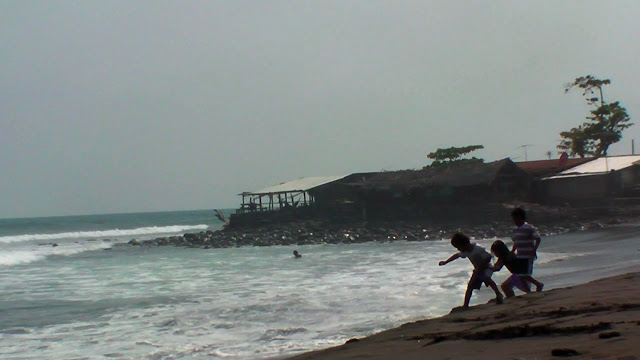 Blaring its horn, the brightly painted school bus veered around the bend - nearly sending me flying out its half opened windows.  The cow thankfully moved out of the road in time for us to zip by, with loud latin music pouring out  into the still tropical air.  Bumpy Bus rides in El Salvador aren't always my favorite.   There is a certain flare and culture to them, but when you have to ride them on a daily basis the excitement wanes and you realize that your are squished up against a dozen other sweaty people on a rickety old bus that is about the temperature of a bikram yoga studio.      We tumble out of the bus, arms feeling like they'd been put thru chinese stretch torture having to cling onto the poles as the bus hurdled around sharp corners,  definitely trying to dislocate our shoulders.  It's a scorching hot walk to the beach, a short five minutes, but enough to set the skin on fire.   We duck under a patch of shade as soon as possible to suss the waves and decide who surfs first. It has been a long week, so we take our time thinking about it.
Even still, the magic of being in El Salvador remains.  We only arrived a bit ago, and while the days were somewhat trying on a personal level,  the travel experience itself is worth sharing.  Put to rest all the fears you might hold about El Salvador and its people- this place is mellow with a purer Pura Vida vibe than even Costa Rica.  (note that there are some things to still be cautious about, we look somewhat vagabondish so I reckon nobody thought to bother us anyhow.) 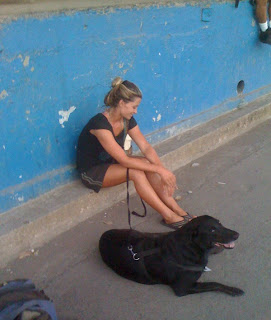 The journey here:   Last friday, after a long two day bus ride from Costa Rica, with 3 border stops and one night in Managua Nicaragua, we stumbled into a little dirt pueblo up the road from the main surfhub La Libertad.  The most famous wave in the country sits in La Libertad- called Punta Roca- a world class, extremely crowded, right pointbreak.   Next up is playa el Tunco, into Sunzal pointbreak, then a few other odds and ends lead you to our little village, Ramshackle Point.  Here we had lined up an exchange with a hostel for our stay, having no clue what the wave would be like but not really having another choice.
The road off the freeway is a very rugged sort of dirt, but thankfully the hostel was only a short ways along it.  When I stood up out of the bus it felt as if i had just jumped on a trampoline for twenty minutes - the remanent vibrations of the long journey causing my legs to tremor and buckle.    After unloading our our packs and boards, we decided to explore town with what little energy we had left.
A mixture of cobble stone, gravel and the errant fallen tree limb winds you to the coast.  Alongside the road, sticks wrapped with barb wire fenced in small tin sheds, each about the size of a guest bedroom.  You'd never know that entire families live inside, until they come out one by one to smile as you pass by.  The campfire smoke choking the heavy tropical air reminded me that these people live much simpler life than where I'm from- all of their meals are cooked over a wood fire- if they have electricity they rarely use it.  If they have running water, they conserve it by collecting river water to wash their clothes, dishes and even themselves.
My feet kept moving along the path, passing a few cows nibbling on fallen mangos,  until the road opened up to a thatch roof restaurant with a picture perfect right peeling across the view.  Our pace increased drastically and we arrived just in time to watch a dozen beautiful waves break from the rocky point into the bay.  It was a short point wave- not nearly as lengthy or legendary as Punta Roca- and with an inside shorebreak that looked a little devastating as this particular tide.  But still, it only had a handful of people surfing it so we hurried home to collect the filming gear.  (our existence as surfers depends on our ability to earn enough money to eat, so filming is always a must.) 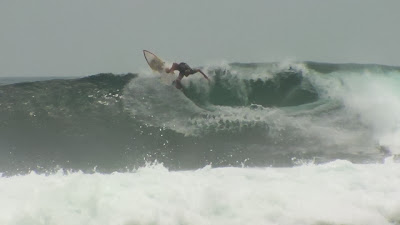 Waves were fun and not too crowded for the first couple of days.  A weekend crowded dampered our spirits, followed by a few weird very unsurfable days, so we started taking the bus to one of the other points in the area.  That's where you found us,  huddled under the shade of a drain pipe, arguing about who had to surf first.  Eventually one of us paddles out and within twenty minutes who ever got to stay on the beach is wishing otherwise.  We're both still like grommets, jut give us a little coffee and  a few moments to collect ourselves after a long bus mission and we'll be frothing to surf any sort of wave.  That day the waves turned out to be pretty poor quality. it only allowed two immediate turns before it mushed to nearly nothing. if you weren't careful you'd do cutties all the way to the inside hoping for a section, only realize you now had to paddle the entire mile back to the peak.
The next day we tried a new spot, the famed Punta Roca where the 2011 ISA world masters surfing championships will be held.   The wave is beautiful- powerful, shaply, and blue.  Walking out over the rocks generally sucks and cuts the feet pretty bad. Plus, the crowd factor is somewhat devastating.   the locals are actually pretty mellow, its all the tourists who are crazy and aggressive.    We desired so much to jump the next bus to las flores, a sand bottom point that could take a swell because its much more protected.  But we have just barely sunk some roots in here, and we'll see how sweet it treats us after we learn its moods.  A bowl of rice and beans are calling, so until next time..... 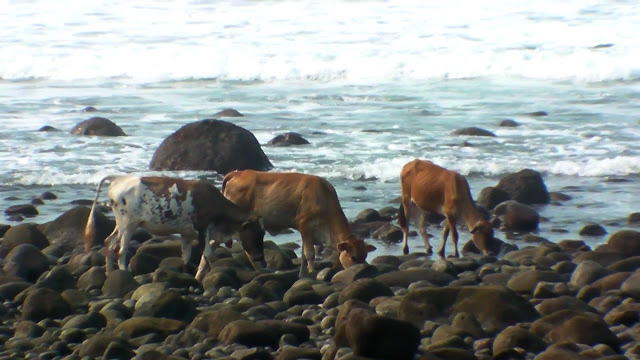 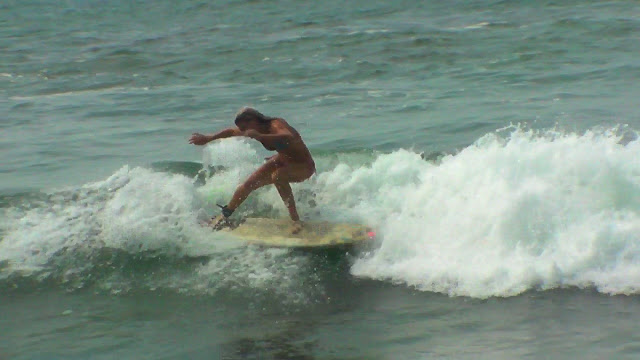 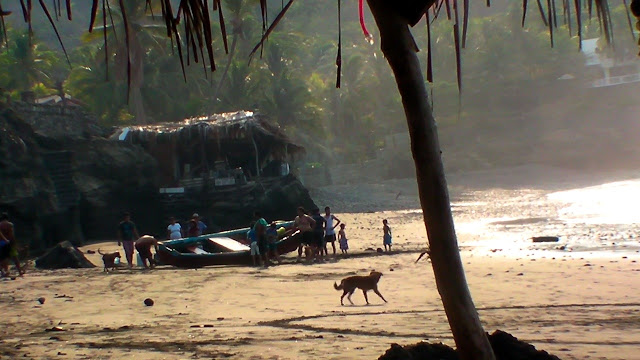 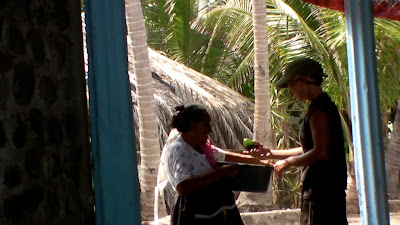 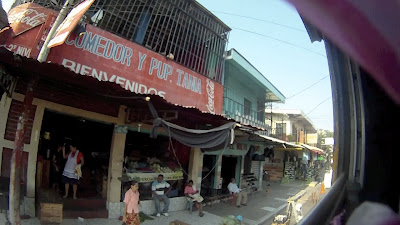 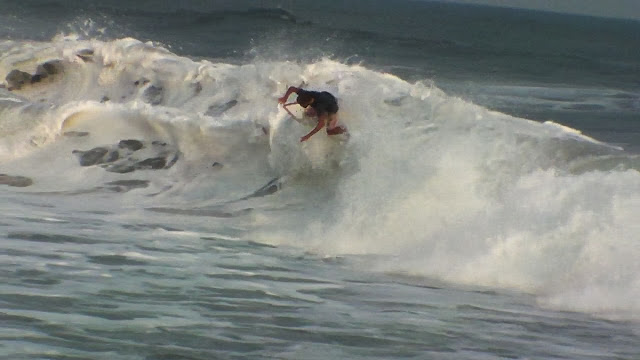 Posted by danielle ciminero + gary lynn at 8:47 AM