Just Say NO to Tap Water. 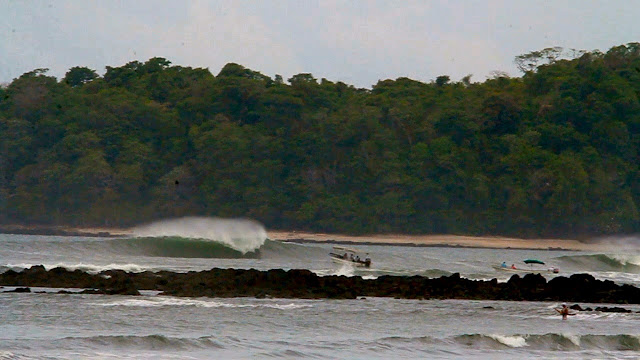 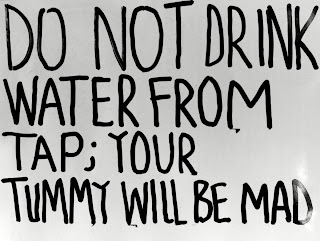 When a sign in Central America reads ^ it is best to treat it with the utmost respect and discipline.  When no sign is present, however, it is best to assume it fell under a piece of furniture with a swoosh of wind, and still heed its warnings as you would a stop light at a busy intersection.  If you don't the result could be fatal.  Or at the very least, severely debilitating.
We have been drinking the tap water in Central America for a long time, mostly because it costs money to buy clean bottled water and our situation doesn't accommodate for that expense yet.   Only once in a while, especially after a hard rain that turns the tap water brown or if we are stressed out, do we get sick from drinking it.  There are all sorts of germs in unfiltered water, but the human body is designed to overcome bacteria, even if your mind is unable to overcome the idea of it.
Still,  drinking the tap water in one town doesn't mean that your body can handle the dirty water from another.  This was an unfortunate discovery at an inconvenient time,  namely the first day of the ALAS Latin Pro Tour event in Santa Catalina, Panama.  I woke with an ache in my belly so severe I wondered if small people were in there attacking me with pitchforks and a grenade launcher.   The stomach pain was agonizing enough that I barely noticed the sweat dripping down my forehead or the fever chills overtaking the rest of my body.   My first round in the surf contest was around 10 that morning and I wondered whether I would be able to crawl to the event site on by then.  In that moment I could barely stand without propping my hand against the wall.
Santa Catalina, the location of the event, is a quaint little town with a fairly high pricetag for backpacker standards.  It has 4 dive shops, 6 restaurants, 7 hotels, a teeny market, a surf shop and no ATM's.   There are a few waves to surf within walking distance, but only two break consistently - the reef and the beachbreak.  The beachbreak is rubbish 345 days a year according to the locals.  The reefbreak is an aframe, with lefts that are short, which mush or close out pretty quickly.  The right has a steep take off that will occasionally have a make-able tube, as long as there are not ten people paddling into the corner of it as your going down the line. We saw some seriously mangled waves and mean wipeouts due to the crowd pushing sections over on people's heads as they tried to pull in.
If no tube was on offer, the first few sections of the right are very steep and critical, leading to a mushier section that often peters out into nothing.  As the tide drops you really want to watch out for the exposed rock reef; it is most un-fun to be drug across it, as many a surfer bearing infected oozing gashes will attest.
If you're not into playing chicken with exposed reef at the low tide, you can head to one of the dive shops where they proudly advertise "Sharks Guaranteed!"  to which I gulp in fear and suspiciously eye the water when surfing.  If you decide to go out for a surf as the tide goes low you will be faced with a fifteen minute rockdance on lava reef that is covered in annoying and occasionally vicious barnacles, followed by a fifteen minute paddle out where you may earn a few finger cuts as your hands find purchase on the rocks hiding in shallow water.  There is a friendly-but-sneaky-turtle who lives at the top of the lineup in Santa Catalina who likes to trick unsuspecting tourists into believing he is a shark, making said tourists hurriedly scramble to belly ride the white water the whole way in. Whereupon said tourist realizes they've been fooled and have to paddle the fifteen minutes back to the lineup.  He is very tricksy so don't be fooled.  Again and again.  And again. It's very tiring. 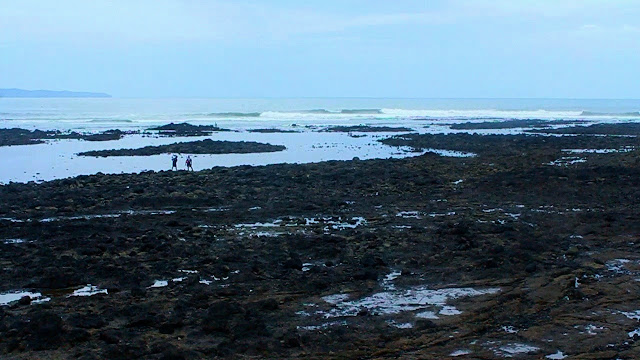 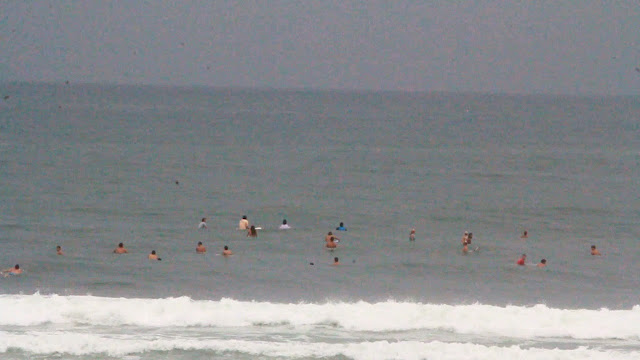 The day previous to ALAS event, despite feeling slightly lethargic from the long trip and having to battle forty Latin Pros hustling for waves, we were both able to catch a few fun ones.  That was "pre tap water" incident.  As it turns out, when sick our mental and physical aptitude start to decline.  A day later and a dollup sicker, I managed get my act together enough to stand up without leaning on a wall, don a contest jersey, rock dance over the dry reef and paddle out for that first heat.
The horn blared and it was time to get cracking.  I paddled for my first wave with the speed of a turtle and got hung up in the lip and pitched over the falls. Eating Sh**t as they say.  No big deal, except that it ripped my leash off and sent my board flying in toward the exposed rocks.   With a 20 minute heat and now a 10 minute swim,  I was thinking the heat was already lost and even more saddening, the chance to finally surf epic looking waves without a crowd.  Despite the fact that I have the swim skills of a pebble, I managed to get to the board before it crashed into the exposed reef, sprint paddle back out to the lineup and get a 5 and a 4  for my top two scores, passing the heat.    Hooray!  I can go home and crawl back in bed now!
I hoped that sleeping a few extra hours that night would do the trick, but awoke the next morning with what felt like a new recruitment of  villagers to cause mayham in my belly.  Pitchforks, grenade launchers, and this time one of them brought a bazooka.  Not cool.  When my contest heat was called, I rock danced once again in the bleary haze of someone suffering alcohol poisoning, and floated out to the lineup on the first ripcurrent I could find.  The three other girls in my heat zoomed around me as if I were the big truck and they the fast and the furious.    When I finally did take a wave I wobbled to my feet, stood there for a few seconds like a beginner and then face planted on my board.  Excellent.
The heat ended and I waddled back in over the rocks with a creeping sensation that I couldn't put my finger on. It didn't really sink in until a few days later,  once I was on a steady diet of clean rain water that we collected from the roof runoff,  the strange emotions that come with a let down like that.
But then I remembered that we didn't just go to Santa Catalina to collect points or medals, we went to explore a new place and get to know the locals; to see how surfing has affected their lives, and see if they had any ideas on what could be done to improve things in their town.    It was interesting to learn that despite having relatively little, many of the locals don't want for anything.  They've learned to live with what they have and be content.
But then again, their happiness could be due in part to the fact that beer is cheaper than water in Panama.  Every time you go to the market you are faced with a choice - even if you are really thirsty for water,  it's hard to argue the price difference whether on a budget or on vacation.
"I really want water today" I told gary before he walked into the teeny closet sized market.  "We really need to buy rice today"  replied gary.
"Well, beer again I guess "  I quipped, thinking about whether I'd rather drink water and eat nothing or have beer and rice.    At this point in our trip, my stomach was offended at both options.
Needless to say, we learned a few valuable lessons on that trip.  One: don't drink the water unless you have a few days to lay in bed, rolling around with a feverish sweat and aching belly.  Two:  to save money and your stomach, just drink beer instead of water.   Three: before you sprint paddle for shore make sure the creepy looking shadow is a shark and not just a turtle.   Four: even though the locals say they want for nothing, don't put it past them to steal your flip flops or surf trunks if you leave them out.  They apparently want for flip flops and trunks,  so bring an extra pair. 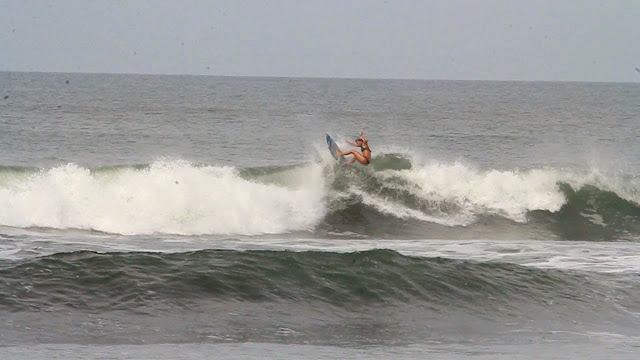 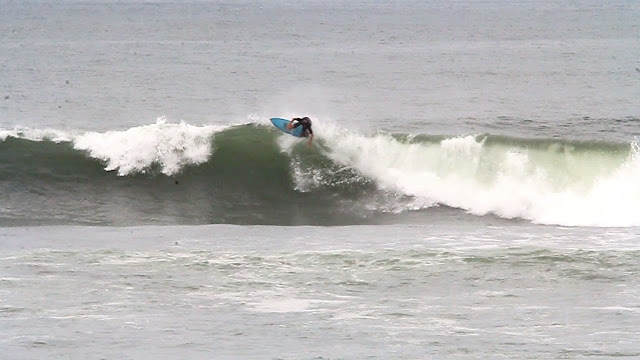 
Here is a video from the ALAS event in Panama.  As for the poor quality, the wave in Santa Catalina is  really really far out over a reef shelf and we had to film from a cliff, for the most part in the rain.  With a bigger lens (we used a 400mm) you could get some nice shots -you can also take a boat to the channel in the morning before the wind hits for some really good side angle views but we just didn't have the spare cash to do it.  The best waves came during the middle of the surf comp, so if you were in a jersey with only 2 guys out you were stoked. 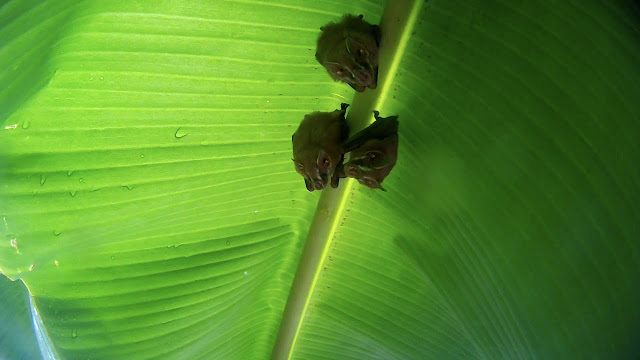 Accompanied by a heavy rain, our leave day rushed upon us windy and wet.  Lacking the running skills of Olympic athletes,  our mad dash to load a friends pickup truck with our gear resulted in two very wet travelers.  With all of our clothes packed in the board bag, which would be  slammed by torrents of rain,  we set off on a six hour mission to Panama city wearing a slight frown.  The small cab of the pickup was sardined with our friend, her son, another friend, us, a pile of everyones stuff, and  their cute little green parrot. Not to mention the lake-size puddles of water on the floor.
We were headed to Mexico for the next ALAS Latin Tour event.   A few years ago we had bussed to Mexico from Costa Rica, which takes twenty hours a day for four days straight,  so flying to Mexico from Panama felt quite luxurious and quick.    To save money, we flew in to Guadalaraja and took the four hour bus to Mazatlan.  We chanced upon a great hostel right near the wave,  the Funky Monkey Hostel,  where we unloaded our sopping wet gear and passed out on a bed so comfortable I shrieked into my pillow upon laying down.

Posted by danielle ciminero + gary lynn at 8:32 AM