Living in a Pin ball machine 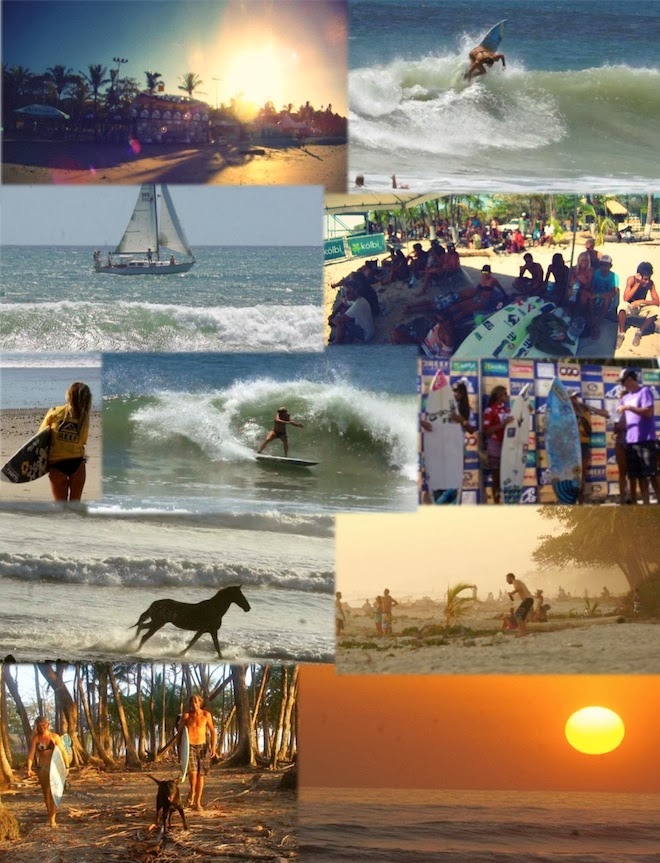 After the past two weeks of hectic busy-ness, I think I have a good idea of how that pinball must feel after a day at the arcade.  We committed to doing two back to back  ALAS Latin Tour events, right after the CNS Hermosa contest, which left us scrambling for buses and rides and hammering out last minute logistics nearly every day.  I think I accumulated about 8 hours of sleep over the past two weeks so forgive me if I loose the plot on this story and start talking about cupcakes.
The first event was in Santa Teresa, Costa Rica.  Thankfully we had a friend driving up so we could pitch in on gas instead of take 4 different buses. It's about a 1.5 hour drive to a 1.5 hour ferry ride to another 2 hour ride.  And it feels much longer.
We arrived around 12pm and got a little room at a hostel boasting the Too Soft bed from Goldilocks and the Three Bears.  You sink so deep into the mattress that only your hands and feet are visible. But the price was right, so we loaded our bags in and passed out.  Sometime around 6am we brewed a cup of coffee and set out to see what kind of waves were on the menu.
Santa Teresa is a dusty little town thanks to its dirt road and fast drivers. It has heaps of hostels, hotels, restuarants, and bars. And a lot of dirt. Did i mention the dirt yet?
The truth is, once you walk  one of the short paths to the coast from the main road,  you are blessed with a picturesque white sand beach, blue water, and playful waves.   If you aboutface to check on the dusty town, you are instead greeted with a lovely collage of emerald greens, society well hidden behind it.  If it weren't for the scafolding and easy up tents erected for the contest on this particular week, it would feel like a remote island.
On this fine day, the waves were looking pretty good but for the blinding wind smashing the lip back out to sea.   The trouble with the Guanacaste can be the offshore winds-  blowing so hard that you have to paddle twice as hard to catch the wave, and you have to be careful where you turn, as the wind likes to steal your board and send it sky bound like a well designed kite.
We set up the camera and began a 5 day set of trading video shifts, editing late night, running around to see when my heats were, and trying to squeeze a free surf in on the side of the contest zone for a warmup.  Gary handled quite a bit more of the filming than me, for which I am really grateful as it allowed me more time to sort out how to surf against a 20kt wind -very tricky business.  In exchange I spent late nights and early mornings editing the nightmare pileup of video clips that he dutifully captured.
The event ran its course and somehow at the end of it I managed to be up on stage again with a microphone in my face. Placing third in the womens division,  I had so much excitement and fear knotting my stomach I uttered a few words of thanks in spanish and scurried offstage. Before I knew it we were loaded in our friends car again and heading south.
We crashed one night in Jaco and caught the 1pm Ticabus- a coach bus that runs all throughout Central America.  Around midnight we arrived in Santiago, Panama and persuaded a taxi to drive us the 3 hrs to Playa Venao - the location of the next ALAS event.  We arrived around 3am to find a lovely patch of gravel to set up camp - so we unloaded our tent and crawled inside for a few hours of shut eye. 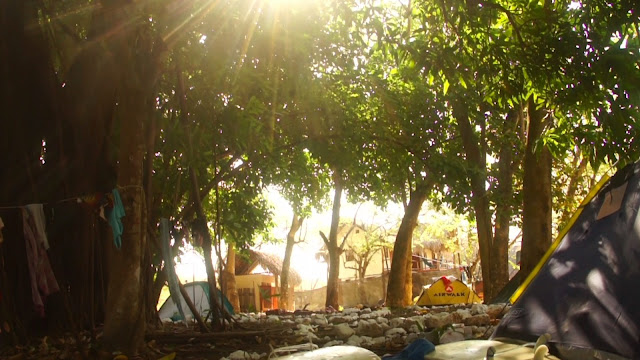 As it turns out, just because sharp things are jabbing in your back, it doesn't mean your getting acupuncture.  I woke up with the weirdest pains all over the place thanks to those rocks and felt slightly jealous of the air-mattresses protruding from other tents.
As I sucked down my first cup of cold instant coffee, a fierce wind wailed at my legs and nearly pushed me over.  Curious, we wandered to the edge of the sand to see what kind of waves were on offer. One of the best beach breaks I've ever seen in my life. That's what.  (Or at least from shore) Clean peeling lines with a consistency of a point break.  Little did we know that the water was fit only for a polar bear and the offshore wind here made the Santa Teresa wind feel like a whisper.  Only when I saw guys paddling out in wetsuits did I realize we had a tiny problem on our hands.
It was going to be a cold, windy, challenging week in Panama. Surfing wise anyway.   The filming had its own issues.  The treeline is pushed back so far in Venao that there is NO shade whatsoever to film under and the wind is so fierce that no umbrella stands a chance - you'd end up like Mary Poppins sailing over the ocean if you even try to open one.   When you are pulling 8 hour days of videoing,  this is a BIG problem.  Needless to say, our Venao experience was one of extremes - freezing cold surfing to scorching hot filming. Taking all of this in, we returned to camp and started screwing in fins.
Camping may seem a strange choice, but let me explain. Venao only has two beautiful resorts to rest your head, both of which are way out of our budget.  They also offer campsites set back a short distance with access to the bathrooms, showers, a community kitchen, power, and internet.   If neither of these options appeal - you can always drive 40 minutes to the nearest town and stay at a budget friendly hostel, provided you had a car.  Camping was an easy, albeit uncomfortable, solution. With no air mattress, we folded our clothes into little stacks to pad our bones from the rocks below.  Thankfully, the campsite was set under an enormous old world tree- something out of Fern Gully -  and between its shade and the offshore winds, the spot had natural a/c blowing. 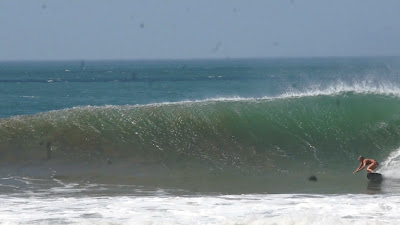 We finally made our way to the contest site for yet another surprise. Waves got a little bigger.  By a little I mean a lot.  With 3 hours of sleep, I thought 'Well I better go figure out how to surf this before my first heat."  The first duckdive took my breath away and pierced my brain with an headache.  Big sets unloading on my head didn't help the situation either.
The sucky part about surfing in really cold water without a wetsuit is that, no matter how much you try to paddle in circles to generate warmth, 10 minutes into it your body starts to shut down-  halving your response time and ability to control your muscles and movements.  Not the best recipe for performance surfing.
I could only take three waves before bellying in with hypothermic symptoms.
I dove headfirst into the hot black sand and buried my legs and hands in an attempt to thaw out. (a trick i learned watching one of the pro kids) People passing by headed for a surf asked me how the waves were, to which I could only reply with a series of teeth chattering clicks.

The surf dropped significantly in size for the next few days, and I passed my first heat with the highest scores of Round 1!  The following day, in my Round 2 heat, I crashed and took a fin laceration to the heel.  It hurt pretty bad and as I paddled back out I checked to see the damage but it appeared fine.  I caught a few more waves and passed the heat, getting an even higher wave total-  the highest of Round 2, and a personal best (16.00) So excited.  But I came in to find blood dripping from my foot and a pretty intense pain running up my leg. No Bueno.  I decided I would ignore it and deal with it later as I had a gazillion video clips to edit. 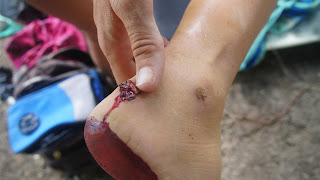 The next day with even smaller waves on tap, I couldn't  get a 2nd wave and didn't pass my semi.  I was pretty sad, so I went for a free surf and with 40 people crowding the free surf zone I managed to snag a dozen waves in 20 minutes and bang turns on all of them.  After each one I paddled back out thinking - that would have been a heat winner...that one too.. and that one.  I was laughing and crying at the same time.
But instead of focusing on it, i decided to focus on the good stuff.
Getting the two highest heat scores is a huge feat for me (event though I don't feel like I deserve higher than a 3 until i figure out how to crank out twelve different turns with an alley oop and air reverse in the mix on the same wave)  I am stoked that I am putting waves together well enough to deserve higher scores, rather than just getting through heats on slightly higher combo's.  i learned so much from surfing in the hard offshores too. 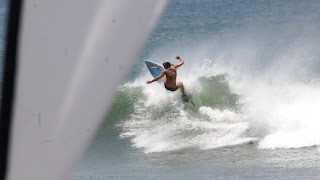 Funny enough, what I felt most sad about was being unable to have proper progression sessions.  One of my favorite parts about surfing is learning something I don't know how to do yet or improving on something I sort of know how to do.  But for the past two weeks I was so busy editing and focusing on not falling that I lost the creatively awesome and awkward crashes I was getting so used to in my freesurfs.  Those crashes will eventually turn into really sick manuevers that link from one section of the wave to the next.  It's like a dance -  you have to learn each step then put it together to form a fluid motion to a constantly changing song.   I was missing those elements terribly....
We had a trip already planned to visit the family for a few weeks-  but it meant we had to leave immediately to catch a full day bus back to Costa Rica and jump right on a full day flight to RI.
As the event came to a close, I felt a strange longing mixed with excitement. Because we couldn't fly the boards back with us, our visit would be a mandatory 3 weeks out of the water.  Taking time off surfing can be a really good thing for the soul (strange as that sounds)-  It reminds you of the pure moments and you go back to it with new perspective and the excitement of a grom....
As for living in the pin ball machine -  I ended up earning some points at the arcade, temporarily rolling down a dark hallway and have landed in front of that gosh darn ejector again.  I think someone is about to pull it.... 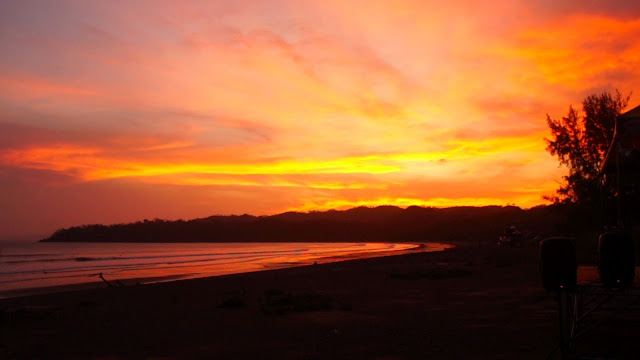 Posted by danielle ciminero + gary lynn at 6:10 AM