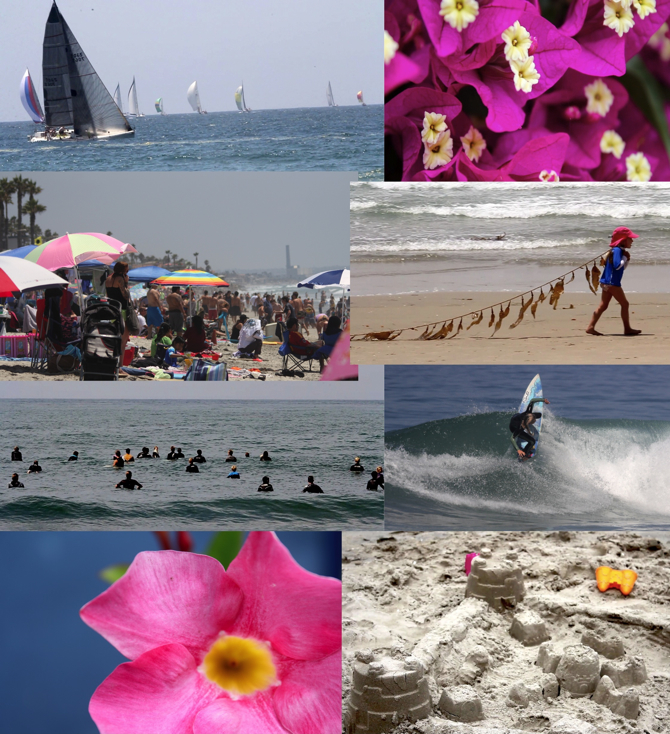 There are a million things to do and twenty million people doing them. All At The Same Time.   Bumper to bumper traffic isn't restricted to freeways at this fine time of year, it spills over onto parking lots, beaches, lakes, walk ways, restaurants and stores.   It seems as if the whole of southern california gets the summer off, not just the kids.
Suburbs twenty miles inland of the coast become an insufferable desert -  reaching temps of 110 on a regular basis. Meaning that people who normally would care less about the beach are now piling their friends, brothers, sisters, moms, dads, grandparents, and pets in the car for a trip to the ocean to cool off.   Umbrella to umbrella, people sardine themselves in on the sandy beaches and shady grass areas.    The beachside vendors are rather lovin' it.
With so many wonderful Summery activities on hand, you'd think that it would spread things out - go on a walk, bikeride, skateboard, rollerblade,  get some food, lay out on the beach, take a dip, learn to surf, cruise a kayak, paddle a sup, etc.    But, no matter where you go or what you do it feels as if you are a Siamese twin with about 35 people- hip to hip, shoulder to shoulder.  If you can stomach it, a trip to the deserted inland desert will be quite a relief from the people-heat-wave plaguing the coastal areas.
Considering it was the height of summer, we did actually score some fun waves during our San Diego visit.   Sometimes outrageously crowded and often only knee high and mushy-  but compared to my lake like hometown on the east coast,  it treated us pretty well.  The only surfable spots during our stay were in Oceanside and Trestles, with a handful of days to be had at Blacks.
Because of the Oceanside Women's surf event we spent many days surfing by the pier, having to snag waves out from the other eighty pro surfer girls in the lineup training for the event.
The event came and went in a flash - I passed my first round with flying colors, only to be dumped off the band wagon in round two.    Looking back on the videos, a bit of under/ overscoring went down.  But alas,  this is a truth I know - if you are new and you want to pass multiple heats you have to do it with undeniable flair- unarguably outstanding maneuvers that leaves no one in a position to add or subtract points where they don't belong.  And I didn't do that.  I should've made that heat, but it wasn't a landslide sort of thing so the scales didn't tip in my favor on that round.   We've all seen this happen in heats and you just have to breath it out and train harder so that next time you can do something incredible and have no one guessing who wins and who loses.
I've been doing contests for 6 months now and I had to remind myself  that I need to be patient with myself while I learn the ropes.  I learned two hugely valuable lessons from the past two events. and while I'd like to be making the finals straight away, I'm stoked to at least be passing rounds in first place.
After the event, we got to spend some really nice time with gary's parents (the original reason for the trip)  - cooking delicious vegan meals and talking walks on the big soccer field at the school next door.  We squeezed in as much surfing as possible and before we knew it the next flight was wheels up and we were headed East for a little how-do-ya-do to my family.